How Consumer Sentiment will Shape 2015

Many factors come together to make the new year bright.

LAST MONTH, I wrote about the easing of mortgage qualification standards and the impact this huge shift in the mortgage industry will have on housing. Now, there are signs that consumer confidence has been increasing, an indicator that bodes well for all segments of our economy.

Spurred by improved consumer expectations, the Thomson Reuters/ University of Michigan Consumer Sentiment Index reached its highest level since January 2004 in January. Consumer confidence is a keen measure of our perceived economic health, as the American consumer represents about 70% of our total GDP. When consumers feel good, or their confidence is high, they spend money more freely, and these expenditures on durable and discretionary items flow through our economy.

Consumer confidence posted its sixth consecutive monthly gain in January, due, in part, to improved personal finances and a more favorable outlook for employment. Most importantly, consumers expressed much more favorable buying plans in the most recent survey. Favorable views toward buying large household durables were at their highest since 2007, and favorable vehicle buying attitudes were the most favorable since 2005. These gains were due to improvements among younger and lower income households, and arrived just in time to boost holiday spending. Total consumer expenditures can be expected to increase by 3.3% in 2015.

When consumers were asked about recent economic developments, job gains dominated all other news items, as they anticipated unemployment to fall during the year ahead. e job gains were attributed to a stronger pace of economic growth, and consumers voiced the most favorable long-term economic outlook since the last peak in January 2007.

And for the sixth consecutive month, consumers expected the largest income increases in six years. An annual gain of 1.1% was expected by all households, the largest anticipated increase since November 2008. “More consumers spontaneously cited increases in their household incomes in early January than anytime in the past decade,” the report stated. 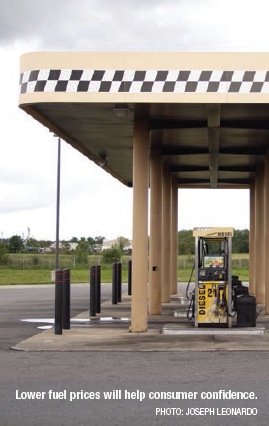 Relief at the pump
What else drives this upward march in consumer confidence? Plunging oil prices, and the corresponding relief at the gas pump, are another major factor. Remember, a fall in gas prices, currently representing savings of $1 a gallon or more in many markets compared to last summer, is the equivalent of a big tax cut, and these savings are spent elsewhere. The current outlook is for lower gasoline prices throughout 2015.

In addition, look at the stock market. The financial crisis pummeled consumers’ savings and 401(k)s beginning at the end of 2008 and into early 2009; the Dow Jones Industrial Average bottomed out at 6,547 in March 2009, wiping out 54% of market value in 17 months, and consumer confidence plunged to 55. Since then, the index has recovered to 18,000 in less than six years, a collective gain of 272%, or almost tripling in portfolio values. The improved balances in U.S. family household portfolios have had a positive impact on sentiment. So taken together, we are experiencing easing mortgage qualification standards, a willingness on the part of consumers to spend money on durable goods, and an overall rising confidence on the part of the American consumer. The impact of these favorable conditions on our economy means a good year ahead for our industry.