Here are three lessons the recession has taught us.

In the last issue, I suggested that a key to our success in the forthcoming recovery is making intelligent use of our mistakes. I have been thinking about the errors of our collective ways, industrywide, and what we should learn from them.

I kept coming back to the Hans Christian Andersen fairy tale, The Emperor’s New Clothes. The story is about a vain emperor who is obsessed with his appearance and attire, and hires two tailors who are really swindlers that promise him the finest suit of clothes from a fabric invisible to anyone who is unfit for his position or is “just hopelessly stupid.”

The emperor cannot see the cloth, but pretends that he can for fear of appearing unfit for his position, and all of his ministers and courtiers do the same. When the suit is finished, the swindlers mime dressing him, and the emperor marches before his subjects, who play along with the pretense.

Suddenly, a child who is too young to understand the pretense blurts out that the emperor is wearing nothing at all. Others take up the cry. The emperor cringes, suspecting the assertion is true, but holds himself up proudly and continues the procession, deciding never to be so vain again. 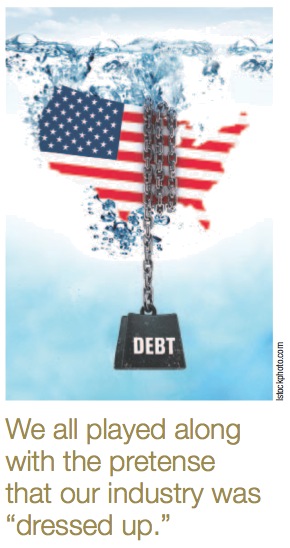 Well, the naked truth is that our industry was just like the emperor, and we all played along with the pretense of our industry being “dressed up” with record volumes and profits, driven by an unsustainable housing and construction boom.

And we should have known better.

Now the worst is behind us. Most in the industry feel that the last few months have finally pointed to an improving construction materials industry. Our clients tell us the same.

Learning by our mistakes
So what have we learned? Here are three key mistakes the industry is guilty of, and hopefully won’t repeat:

So in this recession, who were most like the “child in the crowd?” They were the producers who deleveraged, paid down debt, hoarded cash, or even sold their companies at the top of the market. For those who hung in there and slugged it out, success will be measured by the intelligent use of their mistakes.