Shoulder to the Wheel

Leaders have no choice but to reach agreement on the Fiscal Cliff.

The morning after the election last month, someone asked me how it would affect our industry? I answered, “We are all going to do what we would have done anyway, regardless of the outcome of the election, which is to put our shoulder to the wheel and run our businesses for the next four years.”

I am sure some readers were unhappy with President Obama’s reelection, while others were pleased. That choice, regardless of socioeconomic circumstances or a voter’s station in life, is what makes us the greatest country in the world.

But Wall Street wasn’t pleased. The Dow Jones Industrial Average dived more than 400 points in the first couple of days after the election, scared to death about the Fiscal Cliff. House Speaker John Boehner and Obama quickly shared a strikingly similar tone of conciliation. They have no choice except to reach a compromise.

The Fiscal Cliff issue will be resolved before you read this.

Barring congressional action, federal income, and dividend and capital-gains tax rates will increase on Jan. 1, and the estate tax will revert to a higher rate while also applying to smaller estates. 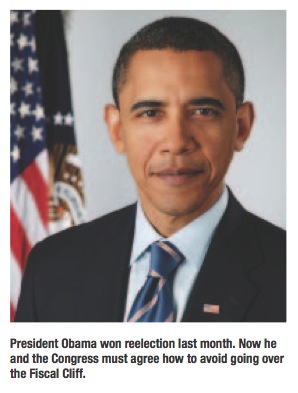 Meanwhile, $110 billion in cuts to federal spending on defense and domestic programs will take place as an initial down payment for $1 trillion in cuts that are required through the next decade under Congress’ prior deficit deal.

Worst case scenario
If were a betting guy, I would opine that this issue will be resolved before you read this. According to the independent Congressional Budget Office (CBO), falling off the Fiscal Cliff would drive the U.S. economy back into recession and the jobless rate would jump to 9.1% by the end of 2013.

Economic output would drop by 0.5 percent in 2013 if Congress fails to avert the tax increases and spending cuts. But the CBO added that the economy in the long run would return to better growth rates and lower employment.

But the silver lining is that with a deal, U.S. gross domestic product (GDP) would increase by 0.4 percent and employment by 400,000 in the fourth quarter of 2013 if lawmakers avoid $55 billion in defense spending cuts required by the earlier debt deal. A similar boost in growth and employment would occur if $55 billion in cuts to other domestic spending are avoided. Also, extending tax provisions set to expire next year and keeping the alternative minimum tax from hitting more taxpayers would boost GDP and generate 1.8 million jobs.

About 10 years ago, I was riding in a pickup truck with a client, an Egyptian immigrant who had started a successful ready-mixed concrete business in the U.S.

Having obtained his citizenship many years earlier, I asked him what he liked the most about this country. He replied, “You have no idea what it means to come from a country like mine and then have the opportunity to be free. For me, it is freedom, some- thing too many take for granted.”

I have told that story many times, and implore us all to rejoice in our freedom of choice we exercised in this last election, and put our shoulder to the wheel.