I Hate it When I’m Wrong

The housing collapse’s serverity and recession escaped many forecasters.

I have a wonderful expression, printed on an 8 1/2- x 11-inch glossy piece of paper, matted, framed, and hanging in my office. It says, “Success is the intelligent use of mistakes.” It was a gift from my wife, who gave it to me after I had dropped the ball on something.

In February 2008, I wrote a column titled “Calm Down: No Recession,” in which I explained why the slowdown in housing and construction activity the prior year was not going to result in a recession of any magnitude, largely because of intervention by the Federal Reserve Board and its chairman, Ben Bernanke. Here was my logic: 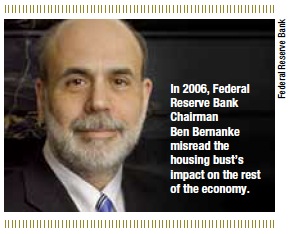 Also clueless
As things got worse, I felt dumb and dumber. Now I learn with the release of 1197 pages of transcripts of closeddoor Fed meetings from 2006, that Bernanke and others were equally clueless, and they have far more resources than I do.

While a handful of Fed officials warned of trouble brewing, most were expecting a manageable slowdown in the housing sector, with little damage to the financial system or broader economy. Bernanke predicted a “soft landing” as 2006 ended, not a housing bust that would trigger the worst financial crisis since the Great Depression.

The transcripts suggest the Fed underestimated the extent to which the housing boom had strained the financial services industry, particularly through exotic mortgage securities.

“We have not seen—and don’t expect—a broad deterioration in mortgage credit quality,” the Fed said in June 2006. The transcripts also suggest Fed officials misgauged the potential for housing problems to spill over into the broader economy.

So I’m framing the 2008 column to hang on the wall. And I’m still forming my thoughts on how to make intelligent use of the mistakes our industry made during this recession.