Housing: How bad for how Long?

Psyches must heal before housing makes a comeback.

For a couple of years now, I have been telling our clients that we will see a recovery in the housing market only when housing prices stop falling. Housing starts drive most other forms of new construction, and new construction drives concrete volumes.

Well, this economic downturn has apparently had a significant impact not only on home prices, but also on the
sentiment of the home-owning public. The impact is so severe, we have to go back almost 65 years, all the way to the end of the Great Depression and World War II, to find a comparable attitude. Not surprisingly, they are strikingly similar.

A survey of more than 1000 homeowners nationwide finds the old expression “safe as houses” has become an oxymoron. Fully 37% of homeowners said buying a home is a “risky investment,” while 86% believe that home prices in their area will either stagnate or fall over the coming year.

That is a striking contrast to much of the past few decades, when many Americans, intoxicated by the housing bubble, believed that the value of their house inevitably appreciated 10% per year.

This is similar to homeowner sentiment after the Great Depression. If history is any guide, Americans might turn even more sour on real estate before they finally become optimistic again, and it could take many years of recovering home prices to restore confidence. In early 1948, the Federal Reserve found that 58% of American households “gave reasons against holding real estate.”

One in five households who were opposed to buying their home said at that time that real estate was “not safe” or a “gamble.” More than half of those who were against real estate ownership said that prices were “too high” or that buyers would incur a “capital loss.” Remember, this was 1948, not 2011. 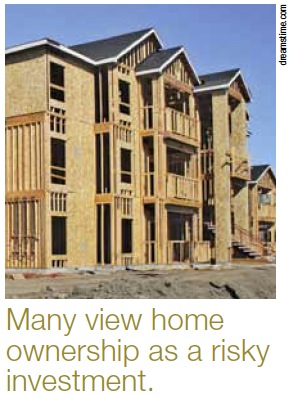 Bottoming out
The negative outlook of so many Americans then was probably shaped by the similar pounding that home prices took during that era. The average home was worth 44% less in 1940 than in 1920. We may see the same value contraction by the time home prices bottom out before turning upward again.

Another Fed survey years later asked for opinions regarding investment options. Even then, the memories of the crash in real estate still stung. Only 12% of households said real estate should be their first choice for investing surplus cash, versus the 26% who favored savings bonds, and the 10% who would put the money in stocks.

But then World War II ended, and the returning troops wanted homes for their new families. So the 1950s and ’60s witnessed a housing boom amidst the emergence of suburbs and a strong recovery in home ownership.

Today, we have the upward pressure of immigration, population growth, and new household formation. And in a recovering economy, we can expect to be back to the normal formation rate of around 1 million new households we were experiencing for many years before the downturn.

But the current mood suggests that the current growth in rental housing construction may fill portions of that need for the foreseeable future. Potential homebuyers have been so negatively impacted by falling home values that their psyches have a lot more healing to do before the idea of home ownership can fully recover.

Our wishes for the new year should include improved housing starts in 2012 and beyond.