Fighting in the Trenches

IN WORLD WAR I, the two armies engaged in bitter combat on the Western Front, marking the first time where a stalemate occurred so early; a series of trenches were built by both armies as each side dug into its positions. Progress was measured in yards, not miles.

Reviewing the previous year’s results for the ready-mix industry, I said that for the first time in four years, we could finally say: “Thank goodness. Progress!” But this year, I am reminded of trench warfare, with progress being measured, figuratively and literally, in yards.

The release of the 2014 survey at the NRMCA ConcreteWorks Conference in Indianapolis in the fall surprised me and my colleagues, as we had expected a couple of positive metrics based on the anecdotal evidence we had seen in our client base in 2013. First, we were sure the industry was returning to profitability, and secondly, we thought volumes and selling prices would advance much further than they did. e result, however, was a year of slower progress than expected, as the industry continues to fight its way out of the deep trenches of the Great Construction Recession, as I have come to call it.

While the industry significantly reduced its operating losses between 2011
and 2012, trench warfare was apparent in 2013, with continued losses. More importantly, precious little ground was gained in Earnings Before Interest, Taxes, Depreciation & Amortization, or EBITDA, the measure of free cash a business generates. Last year, I said, “2013 has continued to demonstrate progress, and I am calling for the industry’s return to profitability this year.” Wrong!

To generate this data, NRMCA producer members provide detailed data on their financial performance for the prior year. An outside CPA firm processes the information and assures the privacy of all data. e report delivers results sorted in various ways: an analysis by size; by region, by company area type (rural, urban, and mixed); and a five-year trend. The report compares the respondents to the Average NRMCA Member, as well as the Upper and Lowest Quartiles from the standpoint of profitability. The 2014 Industry Data Survey reports the results for 2013, the most recent year available. 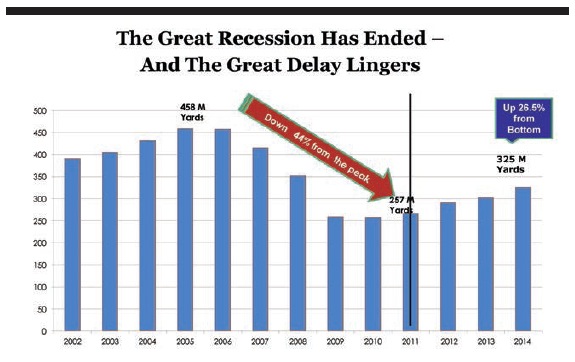 Small volume, price increases
In 2013, total volume of concrete produced increased only 3% over 2012, not enough to create the tailwind on selling price that comes from a strong increase in volume. While prices were up, they lagged most other building product categories in terms of percentage gains. Here are some of the key highlights: