Can You Spare a Dime?

Much of this summer was a roller coaster of uncertainty for the global economy and construction materials in particular. This has added more variability to securing financing from banks.

The contentious debt ceiling debat has scared consumers who have shut their wallets again. This has slowed the economic recovery to a snail’s pace. Add the sovereign debt crisis in Europe and the S&P downgrade that spooked markets beyond any sensibility, and many producers are wondering if we are on the verge of a crisis like we had in 2008.

I don’t think we are. We are witnessing a recovery that is taking a breather as it has fought mightily to dig out of a deep, tough economic hole. Here is what is different than 2008: 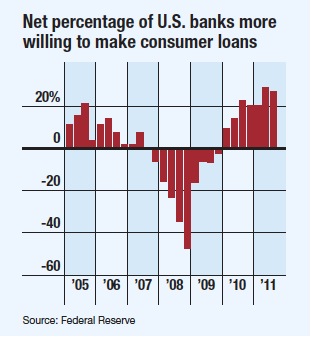 Companies have been socking cash away for a rainy day since the financial crisis began. Now, in the face of more uncertainty, their already bulging cash reserves will grow further.

Non-financial S&P 500 companies were holding $1.12 trillion in cash and short-term investments in their most recent reports, up 59% from $703 billion in the third quarter of 2008. Those stockpiles are providing companies with a cushion of comfort, but the lack of spending is a drag on the recovery.

This massive deleveraging has also extended to consumers. Almost 27% of domestic banks told the Federal Reserve in its third quarter lending survey that they were more willing to make credit card, car, and other consumer installment loans than in the second quarter. A number of banks also said they eased their standards for consumer loan applications. But consumers are not biting.

Who is getting the loans?
In this year’s TCP100 survey, 59% of respondents said banks were not easing their loan requirements. Banks are willing to lend to producers with stronger balance sheets but are shying away from those that remain financially crippled. Loans outstanding to small businesses totaled $609 billion at the end of March, an 8.6% drop from a year earlier, according to the Federal Deposit Insurance Corp.

Another analysis by the Federal Reserve shows big banks’ outstanding loans to small businesses dropped 14% from March 2010 to March 2011, while loans by smaller lenders fell 3%.

This contrasts to the lending trends to larger independent companies with more than $25 million in annual revenue. A recent study indicated 37% of respondents have successfully secured bank loans in the last six months.

This means the smallest producers face the greatest financial challenges. Larger ones with stronger finances have a better chance of obtaining financing they need.