A Jump In Growth

Construction activity should catch up with the rest of the economy this year.

A series of interesting year-end economic reports caught my eye recently. The U.S. economy grew at its fastest pace in two years, as a recovery that had otherwise drifted sideways builds up a head of steam going into the new year. In addition, industrial production in late 2013 surpassed its pre-recession peak for the first time, the latest sign of momentum for the economic recovery.

The government’s main growth gauge, gross domestic product, grew at a 4.1% annual rate in the third quarter of last year, marking only the second time since the recovery began in 2009 that the output of goods and services expanded above 4%. Consumer spending grew at a 2% annual rate in the summer, instead of the estimated 1.4%. Meanwhile, home builders are stepping up construction, manufacturers have ramped up production, and hiring continues at a steady pace. As a result, many economists expect annualized growth in the second half of 2013 to be reported at about 3%, higher than the 1.8% pace in the first half.

The wild card is the impact of tapering by the Federal Reserve of their $85 billion-a-month bond-buying program.

This is a big deal as growth has spread to overall industrial production and consumer spending, the latter of which accounts for 70% of our own economy. It indicates a major healing and recuperation of a badly wounded economy, and the year-end statistics are almost startling. Manufacturing is back to its prerecession peak, as overall factory output was up 2.9% in 2013. Rising auto output led the increase, with car production at the highest level in eight years, while other manufacturers also ramped up production, including makers of textiles, oil and coal, wood products, fabricated metals, electrical equipment, appliances, and furniture. 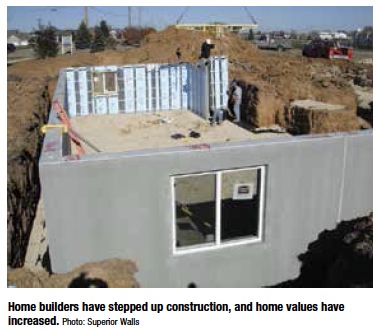 Other measures of the economy have been broadly positive. U.S. employers hired at a steady pace in the last half of 2013, and the unemployment rate fell to 6.7% in January, the lowest since the start of the recession.

In addition to industrial production, there is good momentum from consumers against the backdrop of steady growth in hiring and a fall in the unemployment rate. The gains reflect the new paychecks to previously unemployed workers, and signs that households have adjusted to a payroll tax increase from earlier in 2013; consumers are also being buoyed by the surging stock market and rising home values. Now reports in the business press on GDP show households in the last half of 2013 spent more across the board, including on durable goods such as refrigerators, daily items such as groceries, and services such as health care. Many believe stronger demand across the economy could be a catalyst for higher wages.

But the wild card remains the impact of tapering by the Federal Reserve of their $85 billion-a-month bond-buying program, which is designed to hold down interest rates and spur investment and hiring. But I’m betting the taper will be so gradual, it will be immeasurable in its impact on an expanding economy. As I’ve reported before, the sluggish recovery in our construction economy is puzzling, because construction, particularly housing, has led the nation out of every recession since World War II—until this one. Now, with all parts of the economy near, or back to, their pre-recession highs, our industry can expect a robust 2014.