M&A on the Mend

Mergers and acquisitions have slowed with the economy,
but have not entirely gone away.

It has been a long time since I have written about buying and selling companies since the economy began slowing in 2007. Here is an update on mergers and acquisitions (M&A).

First, activity has not been as active as the prior mid-decade, when blockbuster deals such as the Cemex purchase of Rinker and Vulcan Materials’ acquisition
of Florida Rock were common, and at lofty prices. Many single- and two-plant deals also were getting done at rich prices. 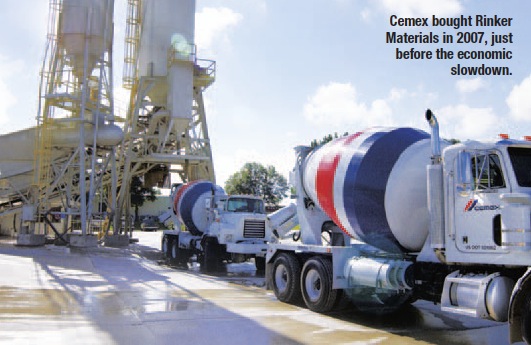 But the deals have continued, albeit at a subdued pace, for the past four years. During this time, our firm has closed transactions in Illinois, California, and Florida, markets that were considered the toughest in the country at the time. Here is why some sellers remain motivated:

As a result, companies have continued to be offered in the marketplace. But unlike a few years ago, many go unsold. The strategic buyers, such as the major multinational cement and aggregate companies, are also capital-constrained. So they are cherry-picking those opportunities that make sense.

The ready-mixed concrete producers without aggregate reserves are the most difficult sell. Those with some level of materials integration are somewhat more appealing. Aggregate producers still draw the most interest, especially in difficultto- permit markets such as California.

Looking ahead
So what are the prospects of a successful sale? Although the “right” deal can get done, the cement and aggregate industries must recover from the contraction in margins and profitability, and return to historical levels of profitability before M&A activity returns.

But there were some construction materials transactions during the M&A boom by private equity groups. They are in the background waiting for a sign the industry is clearly on the mend.

There has been a spectacular accumulation of dry powder, or cash reserves, by the private equity world the last few years. The U.S. private equity capital overhang steadily increased each year, from $197 billion in 2004 to $521 billion in 2009. But it crested in 2009 before dropping to $477 billion as of September 2010.

Three-fourths of that dry powder is in funds raised from 2007 to ¡09. Much of that has contributed to a tough fundraising environment, as private equity investors wait on distributions before committing capital to new funds. That presses private equity to deploy capital. They are looking hard at our sector.

As the construction materials market improves, look for M&A to grow.